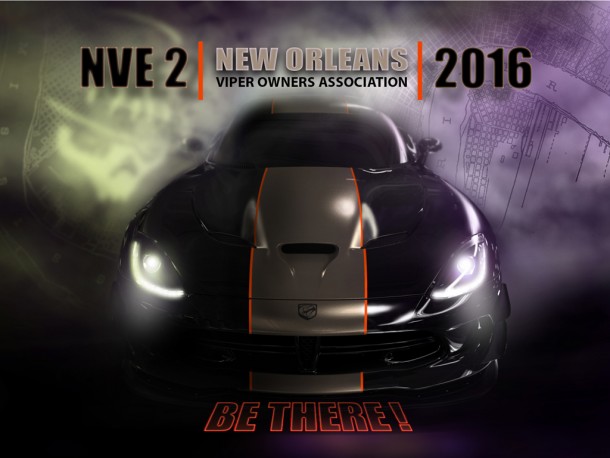 Updated 1/26/16: Alright NTVOA members, the time is getting near. Hopefully, everyone wanting to go has already signed up and doesn’t need to make any arrangements. If not, there is still time! The early bird discount expires 1/31, so if you are on the fence, it’s time to make a decision! If you still aren’t sure, go ahead and sign up, you can cancel up until April 1 and it will only cost you $30 per person, so if you have to cancel, it won’t cost you much.

The events officially start on May 11th, but Wayne and D’Ann are hosting an open house out at their property in Arp, TX on May 10th. If you haven’t been, it’s definitely worth coming out a little early, and for you Dallas folks, it puts you that much closer to New Orleans! Wayne says he is expecting around 50 or 60 Vipers out there, not including our chapter, so it should be a really great time. Wayne has a block of rooms at the Holiday Inn Express in Henderson, TX for Tuesday night, May 10th.

May 11th the 50-70 Viper caravan will depart the Holiday Inn Express in Henderson at 8am. We are meeting up with more Vipers on I-10 at the state line which should add somewhere around 20-30 cars. You can do the math, that’s a lot of Vipers rolling down the interstate! That alone almost makes it worth the trip, and this is just day 1! Stay tuned for more updates, including route mapping should you want to meet up with us at a different location or time.

Updated 12/23/15: NVE2 is coming up pretty quick in New Orleans. This will be the last time for awhile it will be within driving distance for us so don’t miss it! You should already be registered, but if not, there’s still time! Don’t wait! The amount of activities, prizes, giveaways, displays, food, and Viper information present during this event is staggering. I promise you won’t want to miss it. If you aren’t blown away, we’ll give you your money back (no we won’t, that’s a lie) so you can’t go wrong! Click here for more information straight from the horses mouth. What’s that? You haven’t renewed your VOA membership for 2016? That’s okay! You can do it when you register. You don’t want to drive down there alone? Don’t worry, we are planning a caravan leaving from various places in Texas that will ultimately be 70+ Vipers long (more information on this later, stay tuned here and to your email and the facebook page). Boom! No more excuses. Preview this exciting NVE2 trailer below and then register. Now. Do it.

The Viper Owners Association (VOA) is an international club for Dodge/SRT Viper owners all around the world. The VOA is the largest and most active Viper Club on the planet and its mission is simply to help Viper owners have a more enjoyable ownership experience. The VOA provides its members with club activities, amazing quarterly magazine, merchandise, vendor discounts, event insurance, a special communication path to the manufacturer, technical information, and a community environment to share Viper passion with other owners.

You can register by phone by calling VOA Headquarters directly (M-F 8:30am - 5pm EST):